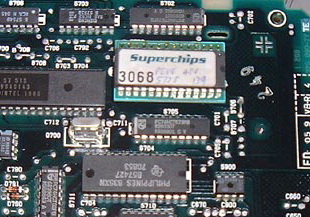 The advent of computer controlled engine systems has lead to a huge tuning industry, all trying to improve the engine performance without getting your hands dirty.

Lets look at what we are trying to achieve.

The more air into an engine, the more fuel it needs, the more power it makes. So it is fair to say if you have an excess of air (lean mixture) if you added more fuel you would make more power.

The ignition side of things is a bit more complex but if the spark is timed to the optimum point max combustion efficiency will result. But if the OE map has to account for poor quality fuel and a degree of safety to prevent engine damage and extend engine life, some improvements can be made.

The best way is for a different map for each engine, and if you have the money this is available to you. Emerald, Gems, Omex, and Webber alpha to name but a few, all very good systems but come at a cost and need rolling road tuning set them up correctly.

What we want is a plug and play device; this is where Superchips comes in with a modified chip for the Mi16.

This is the chip fitted on the board.

internal contents of the ECU

This was fitted to the car by simply removing the old ECU and fitting the Superchips ECU. You can have your ECU fitted with the chip; I bought an ECU with one already fitted.

Next step was to drive it up the road and see what it felt like. Well apart from a deeper roar from the induction and a higher rev limit no real difference could be detected.

It felt nicer - but was this all in my head? Only one way to find out - strap the car on the rollers and test it.

First up was the OE chip/ECU.

I then tried the Superchips ECU.

The graph shows a slight dip in performance 162 bhp and 181 Nm this is most likely due to the additional heat generated in doing the second power run but it didn’t gain any power or torque at any point in the rev range.

Lets lay the curves on top of one another.

So what can we conclude from all this?

The OE map is pretty good and the Superchips made no improvements but how would thinks improve if a set of cams were fitted, would the chip come into its own?

I found a suitable car and repeated the test, but once again the Superchips made no difference, this car was producing 177 bhp and the OE chip was able to keep up with the fuel demand.

So unless you need the rev limit moved on your Mi16 it seems the Superchip will do very little else.