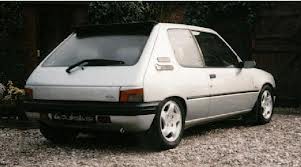 [*]Prise off the inside tailgate panel using a forked trim remover (recommended) or a wide bladed screwdriver. Tip: To avoid scratching with a screwdriver, put some electrical tape over the blade and take your time, prising as close to the fastening as possible. Again these can easily snap and cause rattles if rushed.

[*]Unbolt the lower latch (the bit that actually fastens onto the bottom part of the boot).

[*]Remove the connecting rod that goes to the lock mechanism (if there is one, I can't remember).

[*]Pull out the big metal slide spring clip which holds the lock mechanism in place.

[*]If the car has central locking already, disconnect the rod that goes to the solinoid (90 degrees from the latch rod). Tip: To make life easier, remove the two hexagonal headed 8mm screws that hold the solinoid in place. You can then wiggle the rod off easier as they are bent at the ends and hook in to an eye on the end of the solinoid.

[*]You now have a boot with no lock, no latch and no panel. I would advise that you rebolt on the latch (only 2 bolts), remove the parcel shelf, drop your back seats and have a play with the lock mechanism so you understand how it works, what force needs to be applied in what direction onto the latch to make it open. This will help you figure out how the solinoid needs to push to release the boot.

[*]Drill a hole through the centre of the latch in the plate where the lock mechanim used to push down to release the latch. Warning: This is much harder than you think. The latch mechanism is brass and doesn't take too kindly to drill bits. I took mine to work in the engineering department where it went through a couple of industrial drill bits on a bench drill. I would figure out how to drill this before you start the task . Also drill a small hole first and then open it up until it is about the diameter of one of the lock operating rods you removed (2.5mm maybe?) Your coathanger will go through here eventually.

[*]Once you have your hole sorted (if you pardon the expression!!) you will need to reposition the solinoid so it pushes and pulls in a vertical axis as opposed to the original horizontal way (i.e spin it through 90 degrees). Disconnect the solinoid from the central locking wiring loom if you have it. Tape up this connection somewhere in the boot as it is not needed.

[*]There is a piece of the inner metal framework of the boot that is directly above the lock mechanism. You will need to mount the solinoid behind this, but you need the 2 holes first in order to acheive this.

[*]Position the solinoid roughly where you think it will sit the best, taking into account the position of the electrical wiring connections and the fact that there is goint to be a wire going to the latch from it.

[*]With a nail or longer screws possible, mark where you need to drill two new holes on the framework. Tip: If you put masking tape on the framework first, your marks show up more clearly and when you drill you have less chance of the drill bit slipping.

[*]Alternatively make a template of the hole pattern on the solinoid and make your marks that way.

[*]Drill two holes the same diameter as the original solinoid holes which should be visable on all models. We are going to use the original screws still. Warning: Put something behind where you are drilling, like a piece of wood, or limit how deep your drill can go because as the drill bit breaks through the framework, it suddenly goes deeper and can hit the boot skin, making a pimple on your boot (I did!!) When you have a very smooth boot, this will stand out like a sore thumb! I got Dent Devils to remove it.

[*]Before mounting the solinoid, we need to sort out the wiring. The solinoid just has two pins that makes things easy. When there is no power to it, the solinoid will be loose, so you could pull it in and push it out manually. However when power is applied, it will either push in or pull out, depending on which way round the current is flowing (i.e. if you swap the +ve and -ve connectors over on the solinoid, it will work the other way. We need to get controlled power to it somehow. The way we will do this is to use a push switch, rather than an on / off switch as the latter would leave your boot open until you switched it back to off.

[*]This is where the electric window switch comes in. On the GTI, XS and probably other models, they have a fancy interior light surround with an additional directional light. They also have two black switch blanks that are not used on either side. It just so happens that an electric window switch will fit in here, giving you stealth, easy fitting and that factory look!!! This is where we need to run power to and on to the boot.

[*]Starting at the boot, loosen the flexible rubber wiring connector at the top of the tailgate.

[*]Feed your speaker wire down the hole and coax it down the side of the rear window and pull it through towards the solinoid.

[*]Now it is time to get the wire into the car towards the interior light. This is easiest to do if you losen the head lining so you have some space to mavouver the wire.

[*]This is done by popping off the tailgate mounting bolt covers and the front and rear grab handles. The screws for these are located under covers at each end of the handle.

[*]Possibly you might need to loosen the door rubbers at the tops to allow some play to get the wire through.

[*]Pop out the interior light. Maybe remove the sunvisors and fastenings to make life easier.

[*]Thread the wire through until it appears at the hole by the interior light. Tip: Before you chop your coathanger up for the solenoid rod, open it up so it is nearly straight and tape the end of the speaker wire to the end of the coathanger. This allows you to poke it places and you can grab it at the other end.

[*]Once you have the wire through, there are a couple of ways of obtaining power.

[*]The earth does not need to go through the switch, but straight to the solinoid.

[*]As for the connections on the switch, I'm afraid I have forgotton what the 5 pins do. I'm guessing that the central pin (3) is where the main power feed goes to and the end pins (1 and 5) are the outputs. Of course you will only need one of these outputs.

[*]Once this is all connected up, attach two spade connectors to the tailgate end of the speaker wire and connect them to the solinoid.

[*]Press the switch and see which way the solinoid is working. You will need it to push down / out when the switch is pressed. If it is pulling in, then swap the wires round on the solinoid.

[*]Mount the solinoid in the boot and cut a piece of coathanger a bit longer than the right length to stretch between the latch and the eye of the solinoid when it is pushed in, bending the ends over with pliers. You might have to bend this round quite a bit on the latch to stop it slipping off.

[*]Bend this new rod so the solinoid will push on the latch in the right direction to make it open. This will take some fine tuning so be patient. Tip: Lubricate your lock so it moves more freely and is more likely to open when the solinoid pushes.

[*]Once you have got this right, put all the interior back together, connect the flexible fastner between the tailgate and shell, tape any lose wires securely.

[*]For security reasons, it might be preferable to bond / rivet a metal plate over the old lock hole, so no-one can stab a screwdriver through your rear panel to open the boot.

[*]Now for the rear panel. With filler I put the metal gauze over the hole where the lock ahould be and fixed that in.

[*]Carefully build up filler in the whole until it is just proud if the surface. This then needs flatting down so it becomes smooth. I tried this numerous times and couldn't get it smooth, so as I had done most of the hard work, I took it to a bodyshop where they finished it off, sprayed it and bonded it onto the back of my car. If you do this yourself, you will need clamps etc. It cost me £40 for them to do that and fit the metal plate on, and that was a Peugeot garage!!