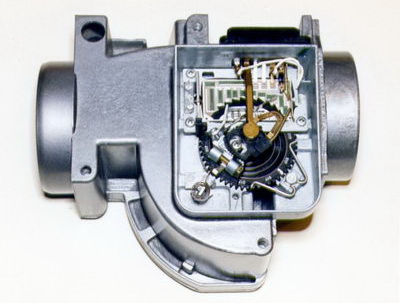 Here are a few things about the injection systems I have gathered from various sources, including Haynes and other books, internet pages (including ones referring to Citroen BXs), own experience, and of course the 205 GTI drivers forum. I tried to be as accurate as possible.

205 GTIs use basically 2 kinds of injection systems: LE2 (LU2) Jetronic, or Motronic 1.3, both manufactured by Bosch. There are a couple of differences between these - the writing below refers to Motronic, so some details may not apply to all of the systems. Basically, Motronic is the more advanced version, but from the driver's point of view, the difference is not very big. The ECU and the AFM have 10-digit Bosch numbers that identify the exact model of the component. If in doubt, check the numbers.

In principle, the injection system is simple: the ECU controls the opening of injectors based on the measurements. But there are quite a few sensors :-). First of all, there is the Air Flow Meter - as the name indicates, it measures the amount of air going to the engine. The flap inside the AFM moves to let the air pass, and in turn it regulates a resistor. Its other function is to measure the air temperature, again with a resistor changing its resistance according to the temperature.There's a black thing located on the side of the throttle body. This is the throttle switch which informs the ECU of the throttle position (closed, open, sometimes even fully open). A third important one is the engine temperature sensor, under the distributor.

There are a few more electronic gadgets (lambda sensor, crankshaft position sensor, tachometric relay, fuel pump relay, etc.), but the above are enough to deal with :-).

So, why is the idling so problematic?

Let's collect the things that should be working when the car is idling. The throttle is closed (in fact there's a very small gap - this is referred to as the throttle initial position), so almost all the air that gets to the engine bypasses it. When the engine is warm, the only way is through the hole provided by the idle setting screw, so this must be set correctly.

To allow fine tuning of the exhaust gas CO (and other emission) percentage, there is a similar screw on the AFM. This allows some air to enter the engine without being measured, so by turning this screw, you can set the air/fuel ratio.

But this is not enough to provide a steady idle in the cold, so the Supplementary Air Device should be working as well, closing only when warmed up (about the SAD, see SAD article).

On top of all this, the throttle switch should be set correctly. And, of course, I've assumed that there are no air leaks or blockages in the system, and that the ignition components are in good nick :-).

During normal driving, the situation is not this complicated. The AFM measures the air getting into the engine, the ECU adds the correct amount of fuel, taking into account the engine and air temperature, and that's it. Throttle switch is open, and the various other air routes are not significant.

Of course, the most reliable method of testing is to replace the suspected unit with a known good one. The methods below provide only evidence if any of them fail, so in an unlucky case the unit can pass these tests and still cause problems :-(. However, this is not very likely.

- Fuel pump testing: Listen for the fuel pump's sound during starting. If it's silent, try disconnecting the fuel pipes somewhere, place the pipe end into a container, and try starting again. If there's no fuel coming, check the fuel pump relay, or, easier, the voltage at the fuel pump. Disconnect the 2-pin connector, and connect a voltmeter between the terminals. When starting, the fuel pump should get 12V (most probably somewhat less, because the starter motor takes quite some power). If the pump turns out to be faulty, it can be removed by undoing six 7mm bolts. New fuel pumps from Peugeot cost a fortune, so go for a used one. Don't forget to renew the rubber washer under the rim of the fuel pump, and don't get dirt into the fuel tank (although the filter should sort it out).

- Fuel pressure regulator: I don't know of any simple testing method for that, sadly. Anyway, it should keep the pressure between 2.9 and 3.1 bars.

- SAD testing: See SAD article. One more thing to try is to check the resistance between the terminals on the SAD. It should be 45-55 Ohms at 20 Celsius.

- AFM testing (notice that there are different AFMs for Motronic and Jetronic systems):

- Pinout of the AFM connectors (pictures show the unit side):

- Engine temperature sensor testing: Remove the 2-pin connector that's under the distributor, near the SAD. Measure the resistance between the terminals, and compare it to the following table:

205gti.com's info on Motronic and Jetronic:

Citroen BX ECU testing, for those fluent in Eastern languages :-)