The procedures on this page are presented as guidelines ONLY. They reflect particular jobs that were done by myself and were written down from memory as a guide to others who might need to do the same procedure. I make no representations as to the accuracy of the information contained here (please remember that I am not a professional mechanic and that free advice is worth every penny). What you do to your car is what YOU do to your car. I take no responsibility for the results of YOUR actions, lack of common sense, or stupidity.

The rear beam on a 205 is really very easy to remove and refit, requiring only a minimal amount of tools and does NOT require the removal of the rear caliper brake pipe. You should be able to do this on your own but it’s much easier if you've got someone helping you at as the beam is a tad heavy so moving it around and lining it back up can be a bit tricky by yourself.

1. Loosen the bolts (or nuts if you've a stud conversion) on the rear wheels, jack the car up and get it on axle stands. It doesn't need to be crazy high but a decent amount off the ground so you can slide in underneath. Usually I put the axle stands on the rear beam when I jack the rear up, however as this is being removed you’ll need to use the sills so be very careful and ensure the car is safe.

2. With the car now sat on axle stands remove the rear wheels. If you've got it fitted it would be best to also remove the spare wheel and cage to gain better access to the area your working.

jacked up and on axle stands

3. Depending on what type of exhaust you have you will need to remove the back box and possibly the center pipe as well. As systems vary I can’t go into detail here, though the pictures show a Magnex backbox which joins just behind the beam so I didn't have to remove the center pipe. 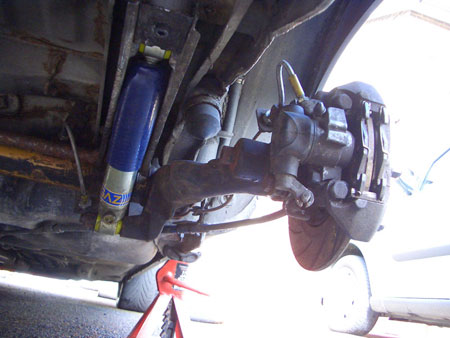 4. To remove the caliper the handbrake cable must be removed. This is achieved by using some pliers or molegrips to pull the cable out of the mounting arm. Pull it towards the back of the car, then slide the cable through the slit, releasing it from the arm. Once that’s out you need to pull (or push) the cable through the mount that holds it to the back of the hub. This often gets corroded in there if it’s not been replaced recently, so be careful not to just yank the cable and wreck it. This is where some pushing is often best with a flat headed screwdriver or similar. Once released from there remove the mounting clips (if you've got any) from the bracket so the cable now just sits freely on the floor.

5. To remove the caliper, simply undo the 2 bolts on the rear and wiggle it off the disc. If you’re rear discs are quite work this may be a bit harder but keep at it! With the caliper free from the disc you now need to unclip the copper pipe carefully from the clips and being VERY careful manoeuver the caliper out of the way onto the floor.

6. The last place the brake pipes are held on are by the lower shock mounting bolt. This must be removed to get the brake pipe mounting bracket off. You can re-fit the shock bolt if you like but it’s not essential at this point. 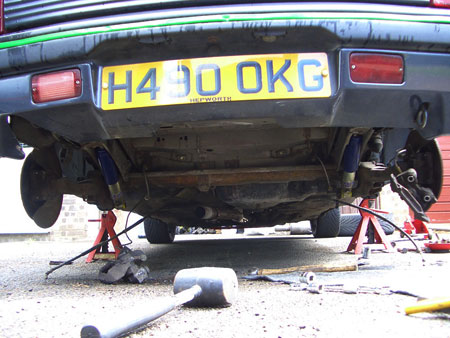 7. Once your done with one side repeat the whole process on the other side until you have both calipers loose and sitting on the floor. 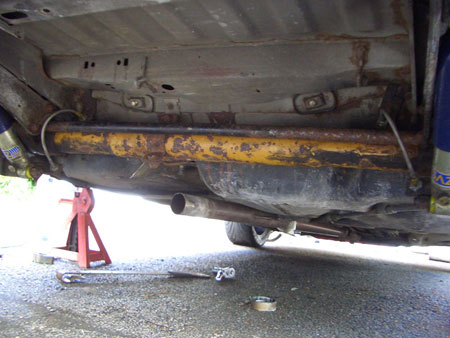 8. On most 205’s there is a support bracket fitted in the middle of the beam heading up the center of the car. It’s an odd thing as 309’s don’t have them fitted so I personally didn’t bother re-fitting this part. To remove the bracket I found it easiest to undo the nuts holding the bracket to the car as the bracket won’t come off the beam. There is also an exhaust heat shield under the petrol tank that may need to be removed too. It’s advised to re-fit this for obvious reasons!

9. With the calipers, handbrake cables and support bracket removed you are now free to remove the beam. To do this, bring in your trolley jack again and positioning it in the middle of the beam just take the weight very slightly. If you’ve got 2 Trolley Jacks then put one at either end of the beam.

10. Now working from the boot of the car remove any carpet/flooring you have in the way and fold the rear seats forward. You’ll now see the rear beam mounting points. There are 2 pairs of nuts (16mm) just behind the rear seats, and 2 single nuts towards the rear of the boot under two plastic covers (also 16mm). Remove those covers and you’ll see the nuts.

11. As most of the weight is at the front of the beam it’s best to remove the 2 rear nuts first. These should come off no problem. If you do have problems it will most likely be a knackered mount that breaks in half. If that does happen then don’t panic as they are undone and will be easy to remove.

12. Once the 2 rear nuts are off start loosening the front 4 nuts. As long as you’ve got the weight taken up by the trolley jack(s) then you should be able to remove all 4 nuts and the beam will stay where it is. If it does drop a little don’t panic as it has to drop a couple of inches before it’s free.

13. Now get back under the car and start slowly lowering the trolley jack(s). This can be a little fiddly but take it slowly and it will come off. Sometimes the beam catches on the threads up through into the boot, just wiggle it about a little to free it up. As it’s coming down be careful with the calipers and brake pipes, you will have to lower it behind the brake pipes and then move the calipers over the top to pull the beam out fully. DO NOT REMAIN UNDER THE BEAM AS YOU LOWER IT. 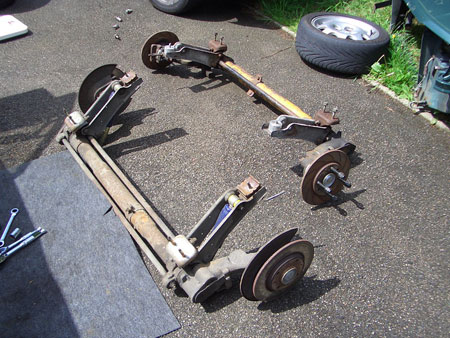 15. Refitting is the reverse of removal, just be careful to put the brake pipes the right side of the beam before you raise it up with the trolley jack(s). This is often where an assistant comes in handy so they can help you align the beam up with the holes in the boot floor, but a few attempts and it should slot back up nicely. Try to get the front bolts through first, especially if you have changed the mounts to Group A as the rear mounts have more movement. 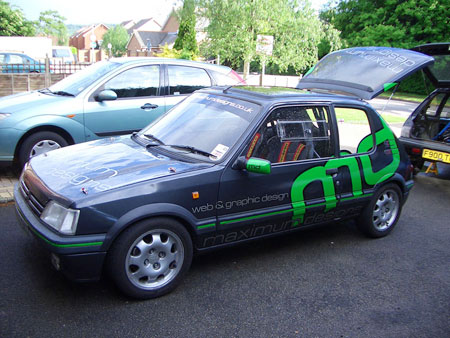 16. Before you put the car back on the floor just ensure everything is back together properly, all the brake pipes are clipped in and the handbrake cable is fitted correctly.

17. It’s usually a good idea to check the 6 main nuts in the boot after a few days of driving (or a 100 miles or so) to ensure they are still nice and tight.

Depending on why you’ve removed or swapped your beam it is a good idea to replace the beam mounts, and here you have 3 choices:

Here is a guide to replacing your rear beam mounts for the Group A Solid Mounts.