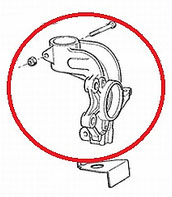 A topic to try and explain everything you could need to know about 205 front hubs, their carriers, wheel bearings, compatability, and what brakes will fit.

Here is a page from servicebox showing the hub carrier, as you can see there are only two types listed, 1.9 and ABS models, and everything else

(seems any 1.9 replacement you buy will be abs compatible, even if your original was not) The two different hub carriers have different wheel bearing bores, here is the smaller one And the larger type. But what about the 1.6 gti you might say, isn't this different?

Well in all the parts mentioned so far, not at all, the only difference is the drive flange, or hub itself, it has a 10mm taller offset than both the base model and the larger bearing hub carrier. A pic to illustrate the dimension called offset As you can see, the TU24 engined Euro Rallye was on 1.6 gti running gear and braking system, anything with ABS used the larger wheel bearing, in reality this was only GTI models to my Knowledge. Here's a 1.9 disc for comparison Because a base model hub is the same offset as the larger bearing 1.9 hub, any "big brake" upgrade mentioned can also be used on your base model 205, however it is worth bearing in mind the additional weight, both unsprung and rotating, of such upgrades and their effect on suspension efficiency, and whether you do need such leverage or would a decent friction material be more than up to the task (typically, they certainly would be)

Moving on to Driveshaft compatibility, both types of small bearing drive flanges have the same 21 spline pattern for the CV joints, so your base model hubs can run 1.6 gti driveshafts, both have staked 20x1.5 hub nuts which are 30mm across flats.

The larger bearing hub found on the 1.9 has 25 splines, and an 24x1.5 hub nut, typically 35mm across flats, original type have a castellated cover and an R-clip, however there are aftermarket shafts with staked nuts as well.

Another point worth bearing in mind when purchasing used hubs, is to try and obtain them in pairs as the geometry varied between early and late cars, though not significantly.

On a similar point worth noting, although the early 306 hub carriers share the same 16mm balljoint clamp, and the small and large bearing hubs, the inclination of the damper is different, roughly a degree steeper, to compensate for this the bore of the damper clamp is at a different angle to give a similar wheel camber value.

Now although the hub will fit directly to a 205, it will give positive camber, i.e the top of the tyres will be leaning outwards.

Moving on to what brakes fit, as mentioned above, the 1.6 gti hub flange is a bit of an oddity having a 10mm taller offset than either base model or the 1.9.

This continues on to the later model ranges, where nothing else uses that drive flange, to understand what will fit brake wise I'll start by describing the hub carriers used.

306's and xsara's used the base model drive flange and bearing, with a similar hub carrier but with the geometry differences as mentioned, anything with ABS and larger than 1400 used the 82mm bearing and drive flange, up till RP07905 they used the same 16mm balljoint pin but a much stiffer hollow cast construction to the carrier and strengthened around the balljoint clamp.

Contrary to what many believed, they are NOT any lighter, they can be used on a 205 or 309 but not without addressing the camber issues, this can be done by a few people, its achieved by boring out the damper clamp at a suitable angle and sleeving back down to 50mm, its similar to how Group A 205 hubs were done, however they took it further and used a sleeve bored at an angle as well, hence building in an adjustment of two camber settings.

The 206 also used a very similar hub with the similar 72/82mm bearing differences and the same two drive flanges, however I don't know any further details as to what camber settings or balljoint pin diameters they use, all I know is that they share the same 50mm damper clamp (as I have AST dampers intended for a 206 gravel car on my ZX) and also the same brake caliper lug radius and offset as a 205. The 307 also shared the same caliper lug radius and offset, utilising only the larger drive flange and bearing, the 308 is in essence the very same running gear as a 307 but a little wider, though the EP6DTX variant has different parts, the details of these I don't know as yet.

This is the part that Colin Satchell uses on his setup for the 106's, though using an insert screwed into the hub to move the pivot point down further, he uses a spherical joint in the end of a tubular steel wishbone, and a custom fabricated 40mm insert type damper leg. Care must be taken when using the 266mm variants as there are a few different calipers and disc types used, numerous caliper types across the ages, and two disc offsets, similarly for the 283 and 288mm setups.

Now moving on to the 406 Brembo setup and similar calipers, starting with a bit of history from the 405.

All 405's used the 82mm bearing and Larger spline Drive flange as a 1.9 gti, however the Brake caliper mounting lugs are a far lower offset and are a larger Radius, therefore these are not compatible with the 205.

Pictured below is the I beam type hub carrier, similar construction to the 205 hub, though with an M38 thread in the bottom to accept a threaded balljoint with a tapered pin and an M12 nut, the same thread as the 307/8 but a different pin taper dimension, again they are the same 50mm damper body clamp. Here is the Later Hollow cast type hub, used from August 1994 afaik, this is the same part as the 406, an M40 balljoint thread with an M14 nut on the end of a larger taper pin (using the 406 picture as the 405 listing doesn't show the later part separately)

It shares the same caliper lug radius and offset as the earlier type. The 406 Coupe as many know already used a 4 pot Brembo lug mounter caliper wrapped around a 305x28mm disc with a zero offset, which is the main reason you don't often see any V6 coupe's on aftermarket wheels. As you can see due to the offset and lug radius differences you cant use these discs, however as the lug spacing is the same the Caliper will bolt straight on.

The closest brake disc I have used personally with these calipers is the Xantia/C5 288x28mm disc, which has a taller 34.2mm offset. Do beware that these are mightily heavy at 8 kilos each, which is a significant amount of rotating weigh to add and also negates the 2 kilo weight saving the caliper gives over a gti6/xsara vts caliper, which has a 2 kilo lighter brake disc, these don't fit behind many standard wheels also due to their bulk, far easier to stick with the gti6/vts setup and a good pad.